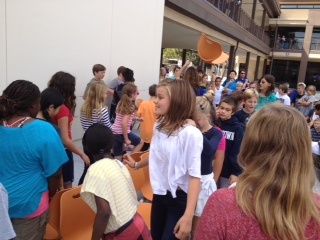 Friday at lunch means one very important thing to Hillview students....it's MUSIC IN THE QUAD! Student Council gets the outdoor amp system and iPod to blast music in the quad at lunch. Okay, maybe not blast....but it's something we all enjoy at our new campus. It also means there is a student council planned Noon Event (to parents....that's student council lingo for a color team competition which can range from the familiar to the outrageous).


First up was Hillview Musical Chairs which, just like the popular game, rewarded speed and a little bit of luck. Outnumbered 3 to 1 in the final four, it wasn't looking good for the Red team as Blue held the dominating position. However, in a stunning upset, Red took home the victory as students cheered on to a furious finish. 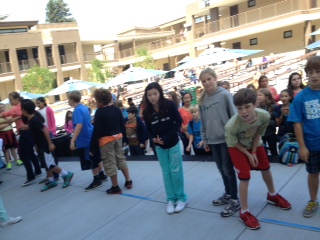 Blue would get their revenge the following week in a student council created game called Backwards Bounce.  It involved teamwork, speed, and accuracy as students from all three color teams raced against the clock to pass the bouncy ball over their heads and under their legs before shooting it into one of two targets. The team with the most skills this week? It was the Blue team on top followed closely behind by Red and Green with a gritty effort. 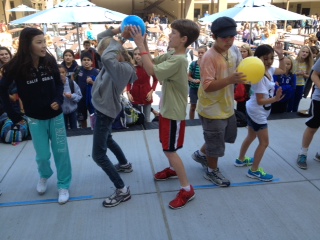 If it's Friday at Hillview....you can be sure that there will be excitement at lunchtime thanks to your 2012-2013 Hillview Student Council! Want to play (you also earn Block H points for entering!)?

Just look for student council every Friday at lunch to sign-up on the outdoor stage.
Posted by ASB at 8:00 AM

Type a comment here... (all comments go to the moderator for screening)