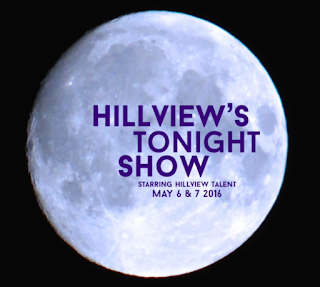 Click Here to Buy Your Talent Show Tickets
Posted by ASB at 8:14 AM No comments:

Hillview Middle School's Hero's Journey Mini Course
By Emily and Sophie, 7th grade
Hero's Journey was a powerful mini course that really made us think about the world around us. We did not just learn about the six stages in the hero's journey, but we also experienced the hero's journey ourselves. Throughout the week we went through the six stages of the hero's journey, and learned that everybody is a hero going through the hero's journey, some just have hit some obstacles. The six stages of the hero's journey are conventional slumber, call to adventure, threshold of difficulty, discipline and training, culmination of the quest, and finally the return and contribution to the world. In addition to having a lot of fun during this mini course, we learned many new things that we will remember throughout our lifetime.
On Monday we started to become familiar with the six stages of the hero's journey, we got to know the people in our group, and we started with learning the first stage of the hero's journey: ​Conventional Slumber ​(unaware of others/outside world). On Monday morning as we all walked into the classroom, everyone was in stage one. We were all in our own world, and we were unaware of others and the outside world. We watched The Lion King and observed Simba on his own hero's journey, and it was a perfect example of all six steps.
Stage two: ​The Call to Adventure​ (the wake up call to become actively responsible) began when we went to Planet Granite and climbed rock walls. This was our call to adventure. Everybody challenged themselves to climb challenging rock walls. We became more active and realized what was going on around us. Everybody climbed at their own pace, and we observed everyone get better and faster at rock climbing as the afternoon progressed.
We learned about stage three of the hero's journey on Tuesday: ​The Threshold of Difficulty​ (encountering obstacles and problems on the journey). We visited the Mission District in San Francisco. In the Mission District, we saw murals painted by Central American artists from that neighborhood. All of the murals on the walls of houses and garage doors told a story. Most of them told of how their neighborhood used to be when there were not as many technology buildings around. The technology companies were taking away their land to start businesses. Through this beautiful artwork, we learned about the difficulties these people were facing.
To experience stage four: ​Discipline and Training​ (accepting guidance and help from others to overcome the obstacles), we traveled to the Yerba Buena Center of Arts, where we saw the Martin Luther King Fountains. As we walked through the fountains, we saw pictures of Martin Luther King Jr. and quotes made by him. We thought this quote "No, No, we are not satisfied, and we will not be satisfied until justice rolls down like water and righteousness like a mighty stream" by Martin Luther King Jr. was very powerful and moving for us. We felt that this quote really shows what Martin Luther King Jr.'s mission was: justice and freedom for all. Martin Luther King Jr. was an example of stage four because he gave guidance and help to overcome the obstacle of segregation.
We achieved stage five of the hero's journey: ​Culmination of the Quest ​(achieving success/accomplishing something) on Wednesday. We went to Chinatown in San Francisco and to China Camp State Park in San Rafael, where we spent the night. In Chinatown, we
walked around and went to the fortune cookie factory. We heard Chinese inside houses playing Mahjong. We walked into a Chinese spice store, where there were a lot of different medications and herbs. As we walked through Chinatown we also saw some Chinese murals, leftover decorations from Chinese New Year like red paper lanterns, and the small alleyways where we heard many people speaking Chinese. We got back onto the bus and headed up to China Camp State Park to go camping. When we got to the campsite, that was when we truly made it to stage five. We unloaded all the camping gear and got to the campsite and set up our tents. The feeling of completion and satisfaction because of the journey we went through was the point of stage five. We took two nature hikes and really appreciated the wonderful world we live in. The scenery was beautiful, the temperature was perfect, and everybody was happy. We spent some time at a beach overlooking the water. In the evening, we went on a night hike. During this, we saw Jupiter, the North Star, the Big Dipper and many more constellations. When we got away from all the city life, we could see nothing but the sky and stars. We heard many frogs and crickets throughout the hike too. It was truly magnificent to just experience the nature all around us. We spent a long, cold, night warm in our sleeping bags inside our tents. In the morning, after some hot chocolate and bagels, we took down our tents and cleaned up camp.
Stage six is the ​Return and Contribution​ (sharing what we have learned with the community). While we were sad to leave, we kept our knowledge that we had obtained over the course of the week. Now it is our turn to tell you what we have learned and about the great journey we have gone through. From watching The Lion King, climbing at Planet Granite, traveling around San Francisco, and camping at China Camp State Park, we have learned about the hero's journey. Like it says in the Lion King, this is the great circle of life. Thank you to Ms. Staff, Elaine Hammond, Andy Becker, Scott Mitchell, and all the other parents who provided supplies like tents and food, for your hard work to make this mini course special! We will never forget this experience.
Posted by ASB at 3:23 PM No comments:

This Week in ASB!!

Hey y'all!! This week in ASB we have two big things going on, elections and the Talent Show!!! Elections are just kicking off with the Constitution Test this Friday! Study for the test with this link! As always, your ASB is happy to answer any questions about elections!! Elections can be scary, and a little piece of advice, just go for it! Its worth it once you put in the work. The Talent Show auditions kicked off today and will continue through out lunches this week. The judges had a blast seeing your acts and can't wait to see more! We absolutely can not wait to announce the theme of this years talent show, but it won't be revealed until a later date. That's about all we have going on for this week, but as we near the talent show, elections and the sixth seventh dance, more events and fun things should pop up! Bye y'all!!
Posted by Mia and Bridget at 9:06 PM No comments: